Playing with dolls is a vital part of play & development

For a long time, most people have thought that dolls were nothing more than a toy used by little girls to play with and practice their role as mothers. But it seems these days, not only do children use them for this purpose, but they also use dolls to enhance their thinking skills & creativity – in fact playing with dolls is a vital part of play & development.

In an article published in “Early Childhood Development and Care”, researcher David R.J Anderson of McMaster University in Canada, stated that play is a method of expression and a way for children to test out their roles as adults, which was far more beneficial to them compared with other activities.

In play-based learning, the play becomes more than just play – it is a vital source for intellectual development. It aids in the development of playmates, language, social skills, and motor coordination. Further, play allows children to work through challenging situations that they are faced with in everyday life.

This idea is supported by a study published in “Cognitive Development”, which stated that play provides opportunities for children to learn new concepts, while also allowing them to develop their thinking skills and creativity.

A study conducted in Taiwan by play-based learning (PBL) researchers Ming-Te Wang, Ph.D., Wenhong Cheng, M.S.E., and Hsin-Yi Guo, Ph.D., found that play was a critical factor in children’s development of academic skills. In one play activity, for example, children used play dough to create a play structure and play figures before gradually initiating the task of adding numbers of play coins on these play objects.

In another play activity meant to enhance their understanding of maps, the researchers divided the play space into two halves – a mountain section and an ocean section – with play mountains and play oceans on each side. Each play figure was then placed in one section of the play space, before children were asked to find their playmates’ play figures. 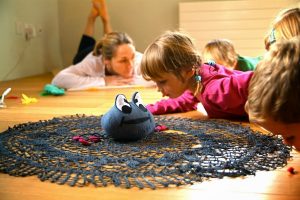 Here children blow baby spiders into a web – this is a simple breath exercise.

Since play enhances children’s development of cognitive skills, it is important that parents set up “play-friendly” homes. Play-friendly homes allow them to play with their children and interact with other playmates. Simple suggestions include leaving a yoga mat on the floor as a clear, unobstructed space to play & move. A box of random toys, characters & items which can be used to create story narratives. Learning how to weave central characters into a movement-based story together is fun, interactive, & physically & mentally stimulating. Storytelling and characters provide a starting point for creating rich, stimulating imaginary environments. Playing with dolls is a vital part of play & development 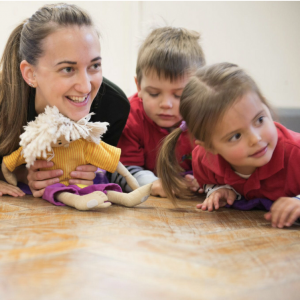 The Tatty Bumpkin doll is the context for the yoga adventures creating a child-led experience.

Create imaginative yoga ideas with simple propsAt children inspired by yoga, we use Tatty Bumpkin & Baby Bumpkin dolls as central figures in our yoga-inspired stories in addition to a host of other fair trade animal toys that represent different yoga poses. Tatty Bumpkin demonstrates poses, mirrors emotions, & signposts the way to problem-solving. In addition, the doll acts as a context for the stories, & creates a child-led environment where adults are in the backseat. 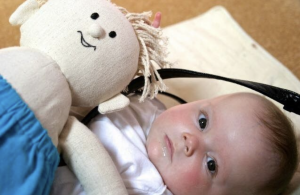 The Baby Bumpkin doll in our baby yoga classes is a friendly, familiar face.

Playing with dolls helps children talk about how they feel